Listen
A previously unknown barrier installation, made of timber carved in the winter of 1113, has been discovered near Karlskrona in Blekinge. Thousands of wooden piles were driven into the seabed, and during the late Viking Age and early Middle Ages defended the entrance to the river Lyckebyån in what was then Denmark.

On behalf of the County Administrative Board of Blekinge County, maritime archaeologists at the Museum of Wrecks examined six supposed ancient remains in Lyckebyfjärden near Karlskrona in the spring of 2021. Already back in 1995, a barrier installation was discovered in the south part of Lyckebyfjärden. During the dives last spring, the archaeologists were able to establish that they had found traces of another barrier on the seabed north of this one, between the islands of Hästö and Länsman.

A forest of piles

When the maritime archaeologists were looking for a shipwreck somewhere between the islands of Verkö and Länsman, their pulse began to race. What seemed like an entire forest of heavily eroded piles suddenly greeted them.

– It’s amazing to discover an unknown piling barrier that is so intact, says Jim Hansson, maritime archaeologist at the museum.

The piles turned out to be mainly made of oak that had either been split or radially cracked. This is a method that avoids sawing off the fibres in the wood in order to better maintain strength.

– It made us realise that the barrier must be very old, given that from the 16th and 17th centuries onwards oak was increasingly rare. Several wood samples were taken in the hope of getting a good age determination.

Both barriers date to the early 1110s. The one found in 1995 likely also dates back to the 12th century. Previous C-14 dating (C-14 is a slightly less accurate dating tool) indicated the 11th century.

– There are thousands of piles that blocked off the straits heading in to Lyckeby. The fact that they built such large and extensive installations reveals the importance of the area. We can assume that there was activity in the area from the end of the Viking Age! Maybe the iron exports are what they wanted to protect, or was it protection against pirates?, Hansson mused. 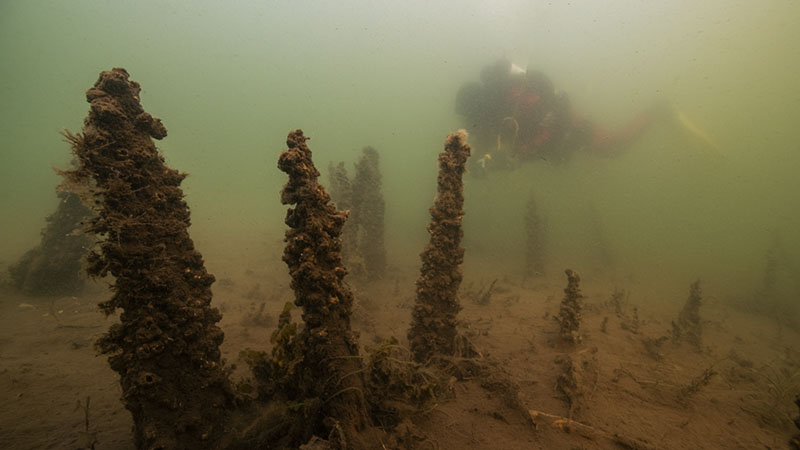