Listen
The waters surrounding Dalarö are home to many well-preserved shipwrecks from the 17th century to the present day. A long-known shipwreck called the Bellevue wreck now appears to have been built as early as the late 15th century or early 16th century. The wreck is thus older than the Dalarö community settled in the 1630s.

The Bellevue wreck gets its name from an old hotel in the area called the Bellevue. A maritime archaeological excavation was conducted last summer, and the resulting samples and analyses reveal that it is one of the oldest wrecks found around Dalarö. It is likely a so-called hulk, a type of vessel known from medieval written sources and images. Its age has been determined by analysing wood samples and by studying the ship’s architecture.

“There are a handful of late medieval ships of this size in Europe,” explains Niklas Eriksson, who initiated the study. Eriksson is a maritime archaeologist and researcher at the Department of Archaeology and Classical Studies at Stockholm University and is affiliated with the CEMAS Centre for Maritime Studies. “But the Bellevue wreck is one of the largest as well as one of the more well-preserved, thanks to the absence of shipworms in the Baltic Sea.”

The archaeological survey indicates that the ship had a forecastle, a combat platform at the bow where soldiers armed with crossbows and lighter weapons stood ready to board enemy ships.

In the Middle Ages, the largest ships were combined merchant vessels and warships that could be equipped and manned with soldiers in the face of impending conflicts. The battles between the Hanseatic League and the Kalmar Union were largely fought with such dual-purpose ships.

“The new findings were recently published in the International Journal of Nautical Archaeology,” Eriksson says.

Read more about the Bellevue wreck (opens in a new page)

The seal from the city of Gdańsk

Illustration for the boat type holk. The picture gives an indication of what the Bellevue ship once looked like. 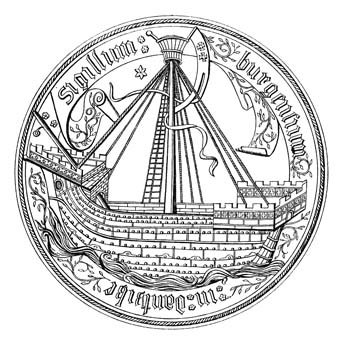